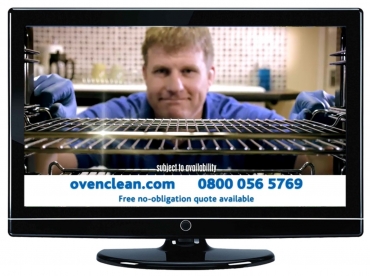 The UK’s longest established and most successful domestic oven cleaning franchise, Ovenclean, are celebrating this week having been totally astonished by the early success of their first ever national TV advertising campaign, with results far exceeding initial expectations!

In just the first week of airing, the advert has surpassed all estimated response rates and generated an outstanding 175% increase in leads for the Ovenclean network and a 155% increase in website traffic year-on-year! As a direct result of the TV exposure, all other marketing activity has increased in efficiency too, with a 36% uplift in leads.

Now into the second week, Ovenclean is the only professional oven cleaning franchise currently appearing on national TV, representing a major investment by the franchisor – supporting its franchisees by raising brand awareness and generating new business through high impact promotion of Ovenclean’s services to consumers.

Group Marketing Manager Lidia Benvie-Ferreiros comments: “We are delighted with the results that the TV campaign has generated so far. The next step will be to analyse the figures and adjust the campaign accordingly, to enable us to achieve even further efficiencies, and we will continue to do this throughout the course of the eight month campaign.

“2015 is really shaping up to be a very exciting year – we have recently recruited our 100th oven cleaning specialist, we’re continually investigating new developments and technology within the industry, and with these early results from the TV campaign, we can’t wait to see what’s to come!”