ChipsAway International is delighted to be celebrating its 21st anniversary since being introduced to the UK back in 1994!

Having grown and developed substantially since its initial launch, ChipsAway has always remained brand leader, standing head and shoulders above the competition and always striving for the best. Not only is this evident from its 300-strong network of fully-trained technicians, but also in the professional repairs they provide to customers nationwide! 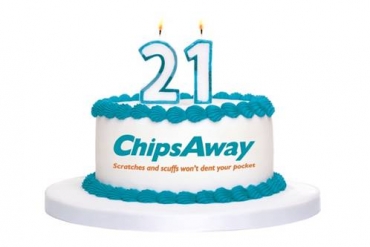 Specialising in minor automotive repairs, such as bumper scuffs, paintwork scratches and minor dents, ChipsAway technicians complete repairs in a matter of a few hours, at a location convenient to the customer, and all at a very reasonable price.

CEO Tim Harris comments, “It’s fantastic to be celebrating our 21st year in the UK and just goes to show what a successful business and service we have to offer! Recent research has shown a huge market for the ChipsAway service, with as many as 24 million of the 35 million vehicles in the UK having some form of minor damage, and with the repairs that our technicians are able to complete, it’s no wonder things are going so well!”

The research also confirmed the company’s status as brand leader, with a staggering 10 times more brand recognition than their closest competitors, which is something they intend to not only uphold, but continue to grow. To this end, ChipsAway have big plans for further investment in technology and ongoing marketing activity, including another 7-month long TV advertising campaign, which commences this week!

Tim concludes: “We’ve come a long way since our launch back in 1994 and couldn’t have done it without our committed franchisees and staff here at Head Office – we’re now looking forward to the next 21 years and growing and developing the business even further!”

All figures, unless otherwise stated, are from YouGov Plc.  Total sample size was 2,030 adults, of which 1,364 own a car. Fieldwork was undertaken between 5th – 7th September 2014.  The survey was carried out online. The figures have been weighted and are representative of all GB adults (aged 18+).